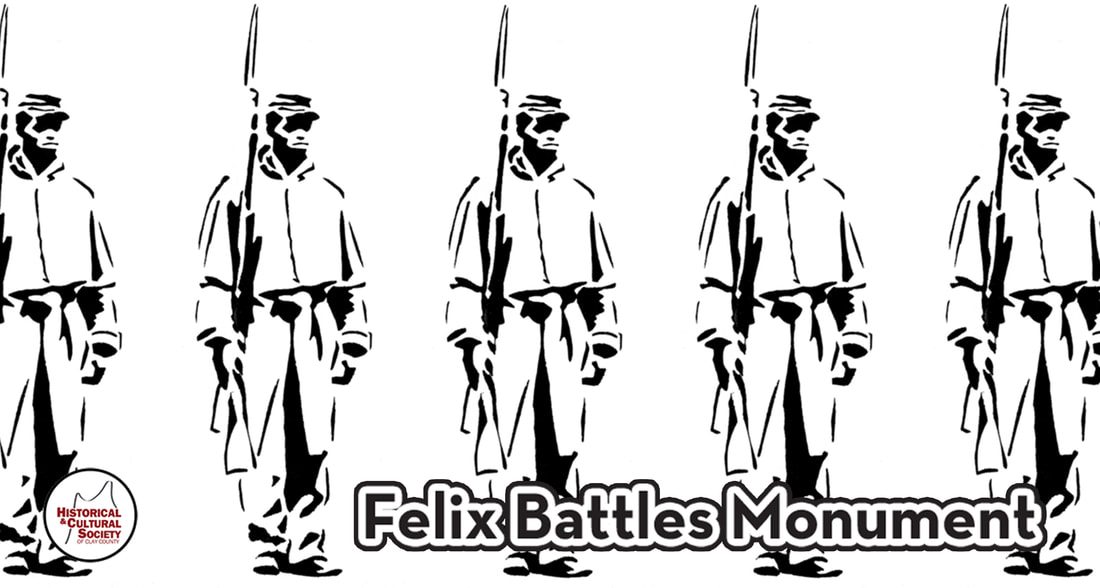 Who is Felix Battles?

Felix Battles was called "the pioneer barber of the Red River Valley." He arrived in Moorhead shortly after the city was founded in the 1870s and lived here until he died in 1907. Battles was born into slavery in the early 1840s on a cotton plantation near Memphis, TN, and lived at least a portion of his childhood as a slave in the southern U.S.

Sometime between 1856-1860, Felix gained his freedom, though we do not know how. He and family members are listed as Free Persons in Dubuque, Iowa, on June 8, 1860. For some time he worked steamboats on the Mississippi in St. Paul. On August 8, 1864, he became one of more than 100 black Americans to join the Union Army from Minnesota. He served with the 18th United States Colored Infantry and in November he was promoted to corporal. As a member of this regiment he took part in the crucial Battle of Nashville, a Union victory that brought Battles back to his home state of Tennessee and effectively took the Confederate Army out of the western theater of the Civil War.

After the war, Battles worked on the Northern Pacific Railroad that brought him to the Red River Valley. He then worked as a traveling barber before setting up his own shop in Moorhead. A stroke forced him into retirement in 1905. He lived in south Moorhead with his wife Kate, her family, and their two children, Julia and Richard.

A March 13, 1888, story from the Moorhead Weekly News. Felix's first shop was in the Jay Cooke Hotel.
Why build a monument?
As our nation debates how the Civil War will be remembered in our schools, textbooks, and public spaces, we believe that Felix Battles embodied both a national Civil War hero and an integral part of our local history. We also think his story should be told loudly and clearly. Throughout our national history, stories like Felix's have been intentionally and systematically overlooked or erased. Our difficulties researching his life affirm this: no birth certificate, no photographs, no personal artifacts. His first public record? An anonymous listing in an 1850 slave schedule in Shelby County, Tennessee. His next? A name, Felix, in an 1856 Mississippi probate inventory. One of 68 slaves. A 13-yr-old worth $600.

Building a monument in Felix's memory will promote a greater interest in his story and others like it. A monument will also stand to remind our future generations that many forgotten heroes — particularly among people of color — have made great sacrifices for this community. Felix can be admired for overcoming a lifetime of injustice and adversity and he can be remembered for his bravery. After escaping slavery he risked his life as an American soldier to free his fellow Americans and preserve the Union. After the war he moved north to the frontier, married, raised a family, and built both a home and a business.

In short, we believe Felix Battles is a man Moorhead can be proud of. 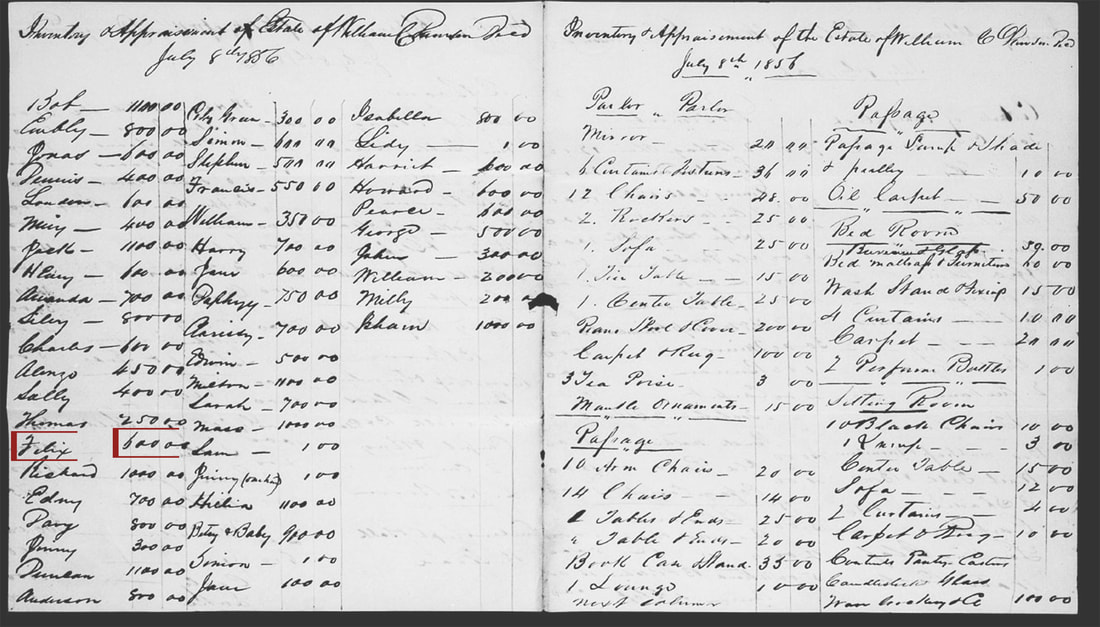 A page from an 1856 probate inventory for the estate of plantation owner William Dawson in Holly Springs, Mississippi.
Who were the U.S. Colored Troops?
"Arms in the hands of slaves had been the nightmare of Southern whites for generations. In 1863, the nightmare came true. It achieved a new dignity, self-respect, and militancy for the former slaves who fought for the Union. It helped them achieve equal citizenship and equal rights – for a time – after the war." - James McPherson, Historian

On January 1, 1863, President Lincoln's executive order known as the Emancipation Proclamation went into effect. Remembered mostly for freeing all enslaved people in the rebelling states, the proclamation also called for the active recruitment of black soldiers. Although some states like South Carolina, Louisiana, Kansas, and Massachusetts formed early regiments as state militia, black units came to be federalized as the United States Colored Troops (USCT).

Eventually 209,145 black American men served in the United States military during the Civil War, accounting for more than 10% of the Union Army and more than 25% of the Union's Navy. Most often, these servicemen were born enslaved, freed themselves by escaping to Union lines, and joined the army to fight for their fellow citizens in bondage. Through their bravery they overcame otherwise insurmountable obstacles; the war would not have been won without them.

After the war, many USCT soldiers returned home to rebuild and remake the south as a free land. The US government protected the new rights of black Americans in the era known as Reconstruction (1865-1877). USCT veterans often became leaders of the newly enfranchised black communities and several USCT veterans were even elected to state legislatures. When Reconstruction ended in 1877, white supremacists regained control of southern governments and cultures through violence. Rights were taken, votes were suppressed, lynching and incarceration skyrocketed, and the USCT's crucial efforts in winning the war were purposely overlooked and concealed while Confederates were commemorated. 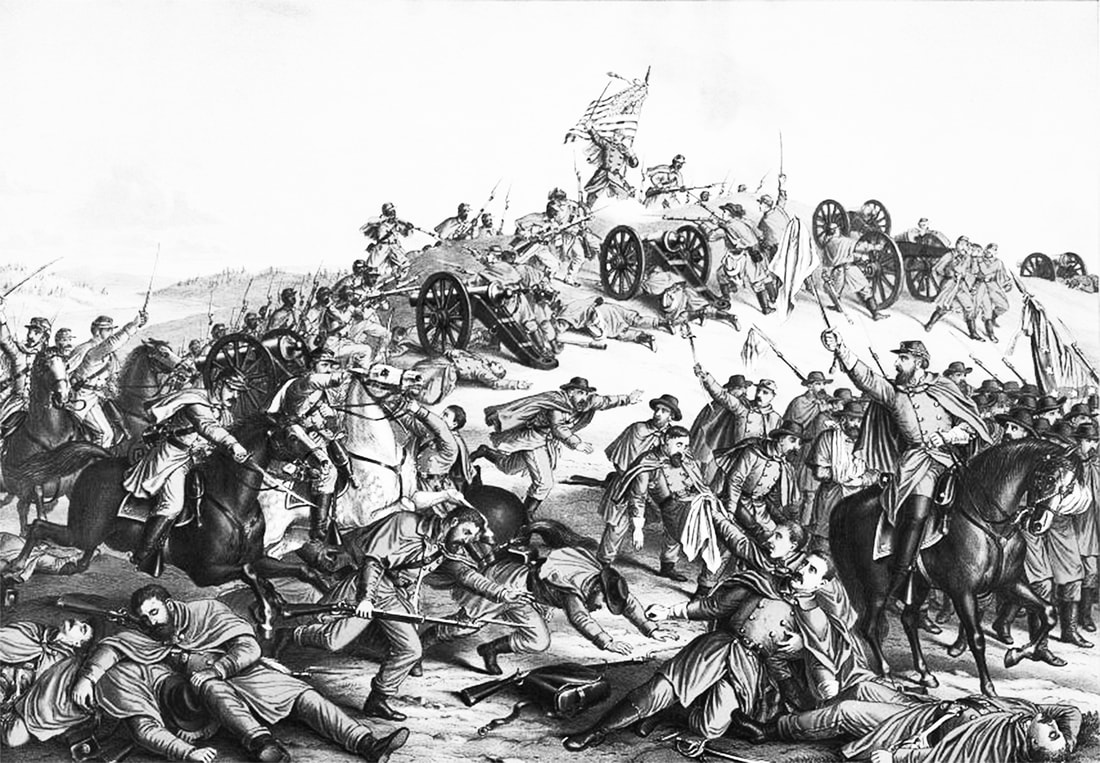 An 1888 Kurz and Allison chromalithograph detailing the Battle of Nashville. USCT members are at the top of the hill.
How can you help?

At this time, we've raised $1,600 of our initial $1,000 goal! Due to the outpouring of generosity, we're now pursuing a larger interpretive panel to better tell Battles' story. We're pushing our new goal to $3,000, and these funds will purchase steel and a two-sided interpretive panel. We've also secured in-kind donations of concrete and labor. While we've moved the fundraising option for this particular goal, we will also still accept donations for the unveiling ceremony and the monument's maintenance.

If you would like to take part in those efforts, stop by the Hjemkomst Center to make a donation or donate online here. Please indicate if your donation should be used for HCSCC's general operations or marked for the Felix Battles Project.